What a successful discovery trip! Jan 4th, 2021
Semliki forest is located on the western Board of Uganda with the Democratic Republic of Congo (DRC) near the Rwenzori Mountains. The forest is protected by the Government as a National Park. This forest is regarded as an extension of the vast Ituri Forest that covers a big chunk of DRC. It is bordered by the Semliki River that detaches Uganda from DRC. It is at 605 m above sea level.
This Semliki National Park is the eastern limit of the West African biodiversity. In other words, there are high chances of finding concentrations of west Africa wildlife species that would be scattered around central and west Africa.
Yesterday, we set up a one-day discovery excursion of this Semliki Forest National Park This was sparked off by the photograph of a rare monkey that was taken by Harriet a couple of weeks ago.
The Semliki red colobus (Piliocolobus semlikiensis) is a type of red colobus monkey from central Africa which has recently been treated as a separate species.
We were also interested in finding the Dents Mona Monkey ( Cercopithecus denti ) which I had seen only once and could not photograph it.

Herbert Byaruhanga, and our trainee

We were joined by the park guide Moses. 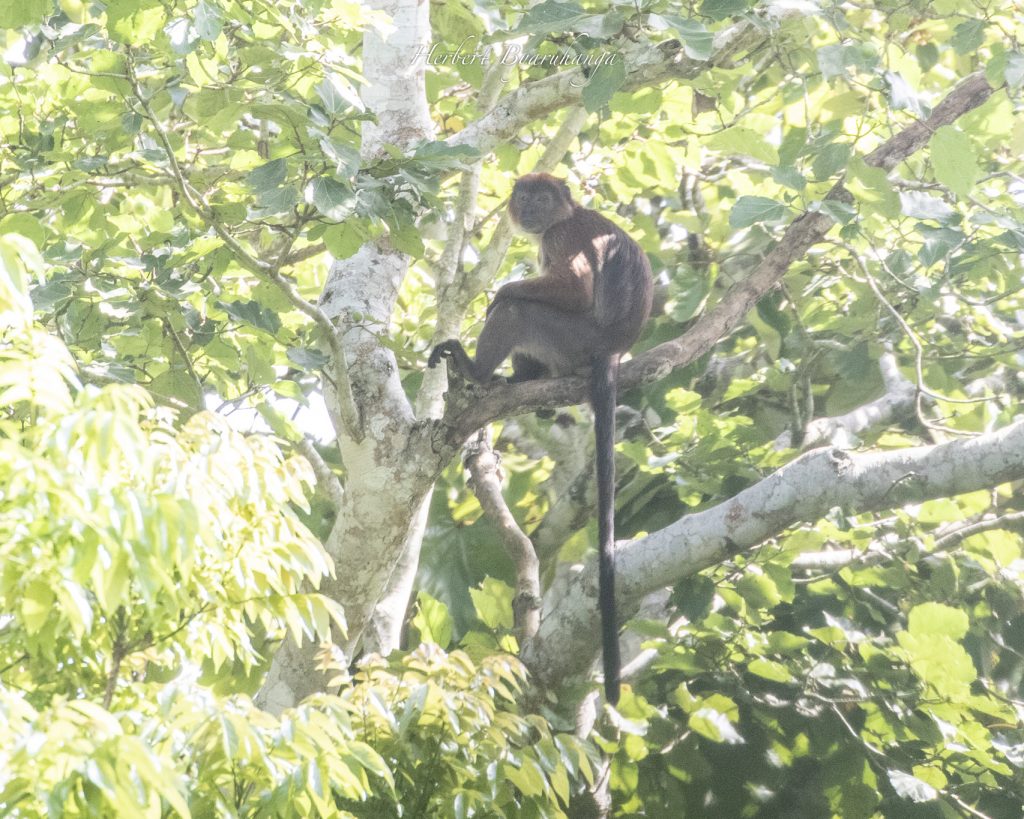 We arrived in time and found our guide ready for us. We spent a short time with the Warden in charge, chatting about our expectations, and of course possible species of birds to pay attention to.
By 8:00am we were already in the forest walking through the popular Kirumya trail. We picked about 50 species of birds by the end of the day. But our main interest was the primates. Patricia turned out to be excellent in spotting birds and the primates. It was my chance to assess her spotting skills since training early last year.
She spotted for me a lifer. The Long-Tailed Hawk (Urotriorchis macrourus)
. I have been looking for this bird for over 25 years.
It was after 4 km that she spotted the first Semliki Red Colobus. But it was far in a distance. We got excited and jumped up and down. It was feeding with the cousins the Mantled guereza Monkeys. Another km away, we found a troupe of about 20 individuals.
This monkey had red head, red arms and the back with a rather long tail. Was quite slow in its activities as opposed to its close relative the Ashy Red Colobus.
After a successful enjoyment of this new primate, we proceeded to look for the Dents Monkey. We found a troupe of about 15 individuals at the campsite just above oxbow lake. This is the same spot where I had seen it a few years ago.
We also later learned that Harriet and the guide Moses has seen the African Dwarf Crocodile Osteolaemus osborni which had been recorded in 1950.
We decided to organise a tour code-named “ Discovery camping tour” which will take place within the next 2 months. It will include guides with special interests in Reptiles, mammals, birds, and butterflies.
The photos are not as impressive as I would have wished but due to the bad light in the forest, this the best I could do.
Posted in Uncategorized
Leave a comment
admi

The Familiarisation Birding and Wildlife tour of Uganda with Carlos Bethancourt